A short distance from Ayerbe, in the Gállego valley, is the charming village of Biscarrués.

The village is divided into two different parts. The profile of the Church of La Asunción dominates the upper part, the church tower the only remaining trace of the original 12th-century building. It appears suddenly from among the surround buildings with its imposing Late Baroque door and perimeter.

The lower part of the hamlet opens onto the square, with its fountain and boundary crosses, and features large façades of one or two story houses with solid masonry, and in some cases, carved details and embellishments.

Its Momumento de Semana Santa is worth a visit: the 22 canvases in this “Holy Week Monument” is one of the province’s best-preserved vestiges of 18th-century folk art.

Another point of interest are the surrounding trails, simple, marked, and suitable for all visitors: trail to the Roman tombs, trail to the Soto del Gállego river, the “Sentidos” trail (along the river, from Erés to the bridge in Santa Eulalia de Gállego ), and the mountain-biking trail that leads to the Castille de Artasona in a circular loop. 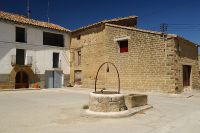 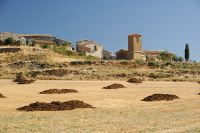