Located north of Ebro Valley, where the Gállego and Sotón rivers meet, Gurrea de Gállego is laid out in a straight line, the hamlet built on both sides of the Calle Mayor, a road that connects both neighborhoods: the old village (or low quarter), and the high quarter, developed with landscaped squares and newer homes.

The Romanesque style of its Parish Church of San Nicolás de Bari can be seen in the back part of the building, which features a triumphal arch façade with decorated imposts, repositioned today; the modern entrance and main tower correspond to the later mid-20th-century style.

The cultural calendar features the “Villa de Gurrea Dance Show”, held every year and today a meeting point for some of the best dance groups and “stick dancers” in Aragón and across the country. 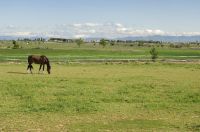