With the silhouette of the village outlined against the sky, Ingriés provides visitors a view of the region’s contrasts from the top of the village next to the Romanesque-style chapel of San Juan (12th century).

The Parish Church of Nuestra Señora de la Esperanza was built after the destruction of the original structure during the Spanish Civil War. The current building dates from 1950.

A stroll through its simple streets is well-worth a visit, as well as the climb up to the Chapel of San Juan, which still preserves its original murals and a medieval necropolis. Today, it serves as the cemetery’s chapel.

Igriés celebrates its annual festivals on January 20th in honor of St. Fabian and St. Sebastian. The pilgrimage to the Chapel of the Virgen del Olivar is celebrated on May 11th and St. John is celebrated on June 24th. 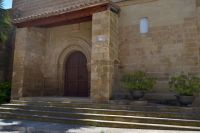