Located at the foot of the Sierra de San Juan de la Peña, the village of Ena appears after a winding road.

The hamlet is built in such a way that, located between two ravines, it creates two neighborhoods linked by some of its main streets. The houses are another point of interest: many preserve elements of the past, like coats of arms and other decorative details, like the Casa Laborda and the 16th-century Casa Ascaso.

The characteristic conical “chamineras”, or chimneys, that crown the homes and are topped by “espantabrujas”, a traditional way of protecting homes from evil spirits, are of particular interest.

The traditional Parish Church of San Pedro can be visited along with the Chapel of the Virgen del Camino.

You can also visit a number of additional attractions including two flour mills, the municipal jail, the trough fountain, etc. 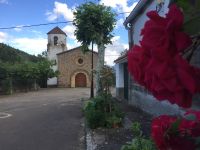