A few kilometers from Huesca, located on the western slope of a hill, Castilsabás was founded as an Iberian-Roman settlement.

Its Parish Church of San Antonio Abad is located at the center of the hamlet.

Nearby, the Chapel of the Virgen del Viñedo plays an important role for Castilsabás and several other villages in the regions, which celebrate a pilgrimage to the chapel on May 1st. The ethnologically significant former mill is conserved not far from the chapel.

The village celebrates its annual festival on January 17th in honor of St. Anthony. 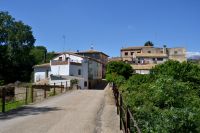