Located in the Sotonera region, today Lupiñén forms a joint municipality with the village of Ortilla, and historically belonged to the Sovereign Military Order of St. John of Jerusalem.

The hamlet is home to a number of important country homes, solid two- and three-story buildings that date back to the 17th and 18th centuries, and the streets lead to the main square and its Parish Church of San Martín. The church combines Romanesque and 16th-century Aragonese Gothic elements, although the main structure was built in the 18th-century. The church has a Latin cross layout and a dome over the transept.

Several chapels are located nearby: the 16th- to 19th-century San Pedro de Verona, and Nuestra Señora de la Huerta, which despite being entirely renovated still houses an interesting Romanesque carving of the Virgin Mary.

The remains of a Roman villa and an important Hispanic-Visigoth site can also be visited.

Another point of interest is Los Ocho Caños spring; two of the eight pipes are nose shaped and are sourced from a different spring than the other six.

The village celebrates its annual festivals on Pentecost, and on August 25th in honor of St. Genesius. 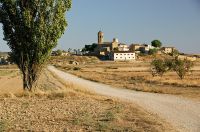 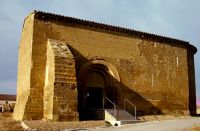 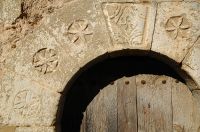