The hamlet of Murillo gradually unfolds on a large rise in the terrain, on the right bank of the Gállego River.

Arriving to the village is a spectacular experience: the road leading to Murillo de Gállego is flanked by a landscape that gradually fills with awe-inspiring sights: Murillo on one side, with Peña Rueba in the background, and on the other side, Riglos, and its spectacular Mallos standing on guard.

Visitors will have to take the climb to the center of the village slowly because the steep slope requires it. The Village Hall is located in the main square along with the Church of San Salvador, a Romanesque construction that features the a 12th-century crypt of Santo Cristo and a monumental apse, although part of the walls belong to later periods.

If you continue climbing, winding your way through the labyrinth of streets, you will reach the original village center and its Chapel of the Virgen de la Liena; the geminated window with two arches in one of the walls are the only traces of the original building.

Nearby, a geological park has been created at the highest point of the village where a small defensive fortress once stood. This spot provides insightful views of the surrounding nature, as well as spectacular panoramic views of the Galliguera River, with the Mallos de Riglos in the background creatign the perfect photo opportunity.

One of the most important events of the year in Murillo is the “Descenso de las Nabatas por el Río Gállego”, a trip down the Gállego River on traditional rafts, celebrated around the festival in honor of St. George on April 23rd. 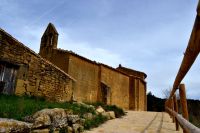