The charming village of Sabayés is located on a small hill near the Isuela River.

Its distinguished hamlet is home to outstanding examples of noble architecture, rough ashlar houses with slate roofs, others with pointed half-arch doorways, popular in 18th-century architecture. Other buildings are modern, but practically all were built to blend with the village.

The Parish Church of San Andrés stands at the highest part of the urban layout, where the hill meets its summit. This Romanesque building was reformed in the 16th and 17th centuries, and only the central walls, topped by modillions, remain from the original church. However, it is the tower that truly draws visitor’s gaze. Imposing and monumental, its strategic position and its robust structure tell the story of a defensive bell tower, with architecture similar to other towers that protected the Pyrenees in medieval times.

At the western end of the village are the remains of an Iberian-Roman castle, although the building visitors see today was constructed in the 11th century by order of Peter I during the Reconquista, when borders were unstable.

Visitors can follow the signs to the nearby Chapel of Nuestra Señora del Patrocinio, popularly called the “Gallinano”; the “casa del santero”, or abbey, is next to the chapel and was built in 1760. Also nearby is the Fuente de las Huertas, a fountain complete with a trough and laundry sink designed in traditional 17th- and 18th-century styles.

Cellars were excavated into rock of the hill under the castle, and today only small stone and brink entrances remain.

A medieval necropolis is located east of the village.

The charming “Espacio Salto de Roldán” Interpretation Center, dedicated to the region’s botany and livestock, can be reached by road from Sabayés. 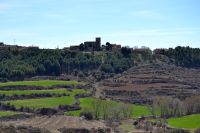