The parish church, located close to the edge of a cliff, is dedicated to San Mamés. The ceiling features small decorative details from when it was built in the 18th century.

Nearby is the boundary cross, which dates back to 1891 when it replaced an older version. It has an inscription: "SAN JOVAQUIN", and two figures (one of St. Miguel; the other, unrecognizable, is likely Christ) have been placed inside.

A tympanum decorates the entrance to the cemetery, a tympanum with carved chrismon, a decorative element from the 12th-century chapel of San Miguel de Sen.

A few kilometers away is one of the region’s most stunning natural sights: the Salto de Roldán. These two imposing aggregate rocks, called Sen and Men (or San Miguel and Amán), are named after Charlemagne's knight, Roldán. According to legend, Roldán jumped from one rock to another to escape his enemies. The remains of the Chapel of San Miguel are found on the Peña de Sen, as well as a small cistern and other elements provide evidence that this was a defensive and strategic point in medieval times, used alternately by Christians and Muslims over the course of the conflict. 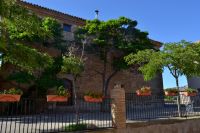 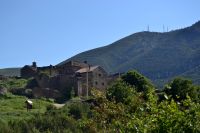