This village in Hoya de Huesca is located on the banks of the Guatizalema River, on a gentle hill that makes it possible to take in all the fertile land that unfolds around it in one glance.

The village’s place name can be traced back to the “Septiumum Milliarium” of the Roman road between Ilerda and Osca.

Its urban layout is simple and adapts to the gradual ascent of the land. Little by little visitors will start to see country houses and buildings characteristic of Alto Aragonese architecture. Start from the restored washing fountain and ascend easily to the central area of the village, where its main square houses the Village Hall and the Parish Church of San Vicente Diácono Mártir. This Gothic building was built in the 16th century by master builder Martín de Zabala.

This is the birthplace of Pedro Pablo Abarca de Bolea and Ximénez de Urrea, 10th Count of Aranda, a prominent officer, diplomat, and industrialist who was at the service of the Crown in the 18th century during the splendor of the Enlightenment, when the four kings reigned: Philip V, Ferdinand VI, Charles III, and Charles IV. To the south of the main square are the remains of the village’s original castle and palace.

Nearby, a marked trail leads to a series of trenches that evidence the tough conditions on the Aragonese front during the Spanish Civil War. The well-known British writer George Orwell was entrenched here. 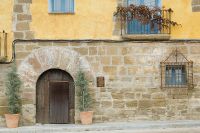 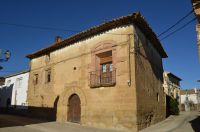 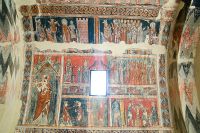