The geological formations called mallos are particularly surprising. Rocky outcrops of conglomerate, evoking enormous towers, with vertiginous vertical faces; they are a paradise for
climbers and home to many birds of prey. The mallos of Riglos, Agüero and Murillo, around the
Gállego river, and those of Salto de Roldán and Vadiello, in Guara Natural Park, are especially striking.

The sierras of the Pre-Pyrenees are home to other stunningly beautiful formations, created by river erosion: these are the ravines, canyions, gullies and gorges, as well as numerous caves and pot-holes, in an underground world of beauty and mystery.

The foz (ravine) of Salinas, next to the Gállego River, and the Escalete ravine, by the reservoir of La Peña, are excellent examples of this type of natural feature, and can be enjoyed in easy walks.

The most spectacular canyons and gorges appear in the Natural Park of The Canyons and Sierra de Guara, where those of the Formiga, Flumen, Guatizalema and Calcón rivers being most popular among fans of canyoning. The gully of La Pillera, near Nocito, on the North face of Sierra de Guara, is easy to reach and very pretty, as are the gorgas (gorges) of San Cristóbal, at the headwaters of the River Sotón, and the gorges of San Julián de Lierta.

In the southern part of the Hoya are the startling escarpes (escarpments) of Piracés and Tramaced, the result of an immense erosive effect on the sandstone terrain, creating an evocative moonscape. The sasos and llanos of Violada, Alcalá de Gurrea and Almudévar, in contrast, are gently rolling terrain with low hills.

Several rivers cross this area from North to South, and provide delightful riverside settings as they descend towards the Ebro: the Gállego, in the Reino de los Mallos, is the most vigorous,
and a major centre for rafting and other white-water sports; other rivers are the Sotón, the Isuela, the Flumen, the Guatizalema and the Alcanadre, winding their way through fascinating canyons and gullies, and farther downstream, charming wooded banks.

Water is also present in the various reservoirs, offering numerous swimming spots and pleasant walks: the reservoirs of La Peña, Arguis, Belsué, Cienfuens, Vadiello and Calcón. The reservoir of La Sotonera also offers boating. The albercas, ponds forming part of irrigation systems of Arabic origin, are also lovely, and are a regular haunt of many types of water fowl; notable examples are the alberca de Cortés, by Chimillas, the albercas of Castilla and Alboré, in Lupiñén, the alberca de Loreto, near Banariés and the alberca de Valdabra, on the outskirts of Huesca.

This varied landscape is covered by very different plant species, especially holm oaks and pines, fields of cereals, orchards and groves of olive and almond trees. Herbs and Alpine plants, such as saxifrage, houseleeks and calceolaria, also cling to the rocky landscapes of La Hoya. Poplars line the riverbanks, and mountainous areas teem with Atlantic and Pyrenean plants such as fir and beech.

Wildlife is also diverse in this area, with wild boar, roe deer, rabbits, partridge and wild cats. The skies of La Hoya are patrolled by birds of prey and carrion-eaters such as the griffon vulture, red kite and bearded vulture. Water birds also use the albercas of this territory as a stopping place on their migrations across the peninsula.

All of this diversity deserves a leisurely stroll and contemplation from our outstanding miradores (lookout points). Some which can be enjoyed without requiring a lot of effort to reach are the Pico del Águila, next to Arguis; Salto de Roldán (Roland’s leap), next to Santa Eulalia de La Peña; the medieval tower of Santa Eulalia la Mayor; Mount San Miguel, in Ayerbe; Marcuello castle and the Mirador de los Buitres (Vulture lookout point), in Sarsamarcuello; the chapel of the Virgin of La Peña, in Aniés; the mirador de la Reina lookout point, at Loarre Castle; el Colegiata lookout point, in Bolea; La Corona hill, in Almudévar; the Piedra del Mediodía (midday stone), in Piracés. 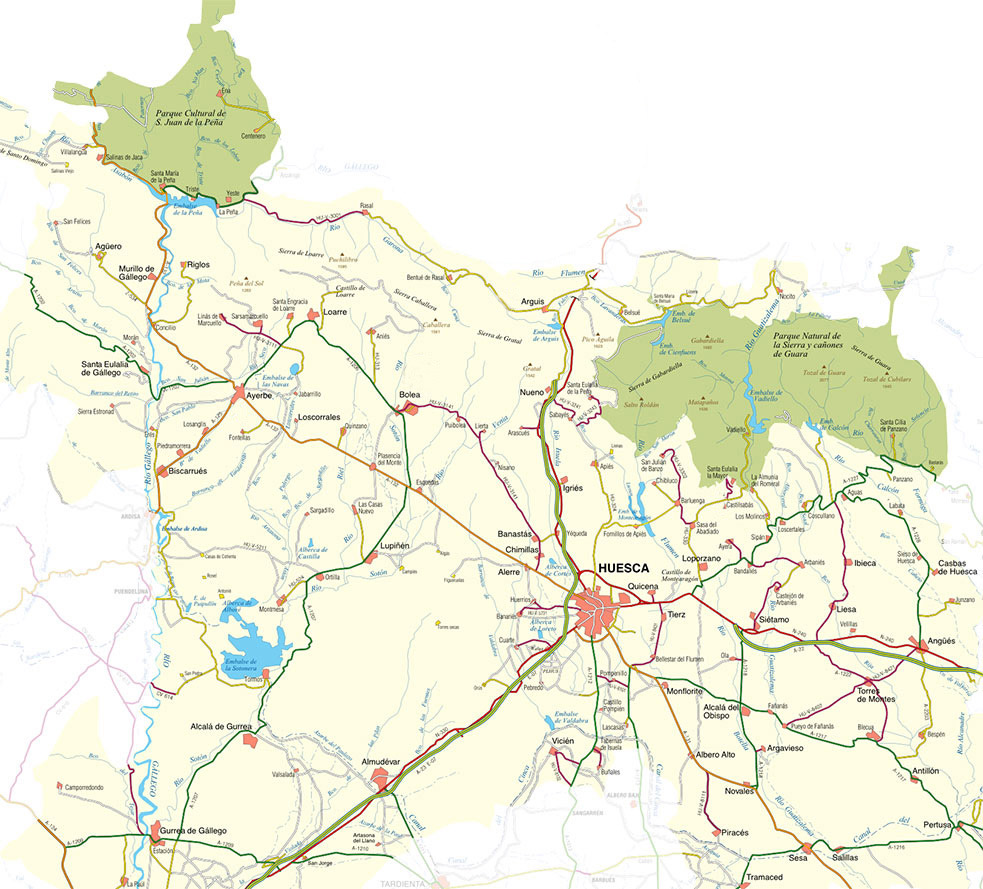