Sesa is a small village located on the banks of the Guatizalema River.

The area was once inhabited by the Romans, who coining the first coins here between the 1st and 2nd centuries BC, and although it was a very rare mint with few pieces made, these were the first denarios to be discovered in Aragón.

There was significant Muslim presence in this area that meets the Somontano de Barbastro, which is why the King of Aragón decided to gradually conquer the plain, rich and fruitful compared to the harsh mountain.

The hamlet of Sesa was built adapting to the terrain of the hill, with the early-13th-century Parish Church of San Juan Bautista at the center. The building features a single nave ends in a semicircular apse topped by a quarter-sphere vault. Aside from the barrel-vaulted apse, the church also features a façade with six archivolts that rest on four pairs of capitals decorated with Gothic plant designs and two pilasters.

To the north of the temple, a prominent rocky platform was once most likely an Islamic settlement that was later fortified by the Christians, a common occurrence in the region.

Nearby is the Chapel of Nuestra Señora de la Jarea, with a Gothic cloister and a lime kiln, as well as the interesting “piedras fecundantes (fertility rocks)”, linked to ancestral fertility rites: "Chaste" and "The Mouse". 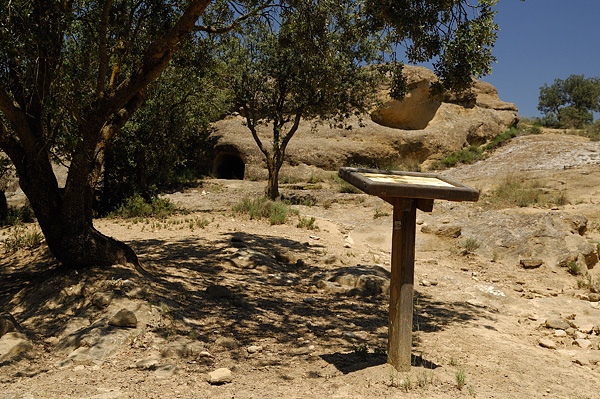 Sesa celebrates its annual festival on August 15th in honor of the Assumption of Mary, and the pilgrimage to Nuestra Señora de la Jarea is celebrated during Easter Week.